From Will You Snail Wiki
Jump to navigation Jump to search

Error: This voiceline has not been recorded yet.
TBA stands for "To Be Added" and is used as a placeholder for information that will be added later. You can help us by adding missing information.

Throughout the 4 years of development on Will You Snail?, many assets have been created but ultimately left unused.

A animation of Beta Shelly with a crown on its head.

This would appear where shelly would die and persist on the screen.

These were the old walls before Jonas changed the art.[1]

A version of spr_airspike that matches the newer art style.

A colored, more derpy looking version of the Jellyfish.

This enemy launches itself towards Shelly at a random speed and falls off screen, unable to interact with anything or fly. They used to spawn from Scrapped Mr. D.A.N.C.E. when pushing the up button.[2]

Currently, there is only one boss known to have been scrapped. This boss was an older version of Mr. D.A.N.C.E. Levels including it are still included in the game and are still playable. Some footage of this boss can be found here. There are a total of 3 scrapped levels with this boss, one of which is also a puzzle level.

The player must control Mr. Dance using buttons placed throughout and move it to a designated target zone. Once Mr. Dance reaches the target zone, the game automatically advances to the next stage. In the first level with this boss, it also spawns bullets that follow the player.

Jonas did not like this boss, so it was scrapped and rebuilt from scratch.[3]

Unused Art for the scrapped attacks can be found in the data.win and Jonas's video (I Made a 500 IQ Vacuum Cleaner) and some of his old streams for Squid's boss fight

Playtesters & Jonas did not like the 2nd phase of the fight and so the entire phase was overhauled and a majority of the attacks and art were removed.[4]

Used to be Squid's Phase 2 design. One of the attacks Squid would do was where Squid orbit around the teleport marker and gain speed.

This attack would've been shot towards random positions, rotating and growing in size every second. In another version of this attack Squid would burst a bunch of them with varying colors and larger sizes along with the other attack below.

This attack would've been shot towards random positions and would move like a tornado.

This attack would've acted like the Blast attack from Phase 1 of the fight, but less projectiles. Another version of this attack would also be shot but return to Squid after a few seconds. 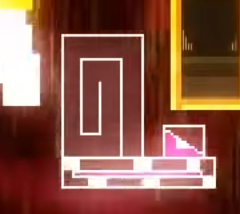 Squid would spawn Evil Shellys at his position, but this version does not reflect Shelly's movement and instead move their way towards Shelly, once colliding with Shelly or after being shot Evil Shellys would explode like the fireworks attack

The walls in phase 2 of the fight would randomly turn white and start going transparent to be visible, until they returned to normal. Bullets were used to be able to go through the glitched walls and cause more damage until it was removed. The walls would kill the player on touch.[5] 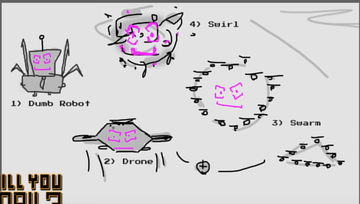 In the concept art for Squid boss design, we see 4 designs for Squid.

Jonas states that Squid would control the robot and because of how it looks, it called Dumb robot.

This concept art is used in game as Squid's first phase Dronelly.

Jonas also states that this version of the boss is more serious and would fly around the level.

This concept is a bit similar to Squid's scrapped 2nd phase design instead with a swarm of Drones/Flying Enemies.

Jonas states that this version would be keeping the "loose face" of Squid.

This is the scrapped 2nd phase design of Squid.

Jonas states that this would be used for the 2nd phase and would represent how the game is glitching and allow him to take a lot more creative freedom with the boss.[6]

Unused dialogue and text can be found in the game .exe and as game objects in the data.win.

Old dialogue and lore was meant to be accessed in-game as "text files" (or "secret files" or "notes") (which can still be seen in some unused levels). These are irrelevant to the current story.[7]

An early version of the story was linked as a spreadsheet in Game Dev Daily #026 - Game Structure (Spoiler Alert!).

UNotes (presumably short for "Unicorn Notes") were text files where the player can ask questions to Unicorn about the simulation and Squid. Earlier UNotes have two-digit IDs, and the later revised UNotes have three-digit IDs. 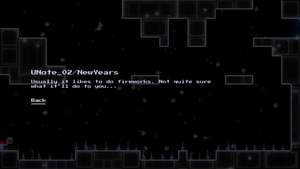 Files titled with "Notoe" appear in Will You Snail? - Winter but are left unused in the final game file. UNotoe_01 appears in the first level, UNotoe_02 in the second, and UNotoe_03 in the fourth. 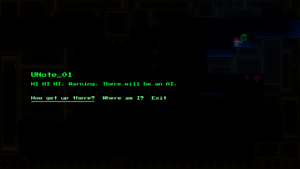 UNote_01 in the winter demo

If level_before_first_contact is accessed, a slightly different version of UNote_01 can be seen:

Snails? Really? Why that?
This article's name is unofficial. An official name is yet to be given to the subject matter. Please add an official name when reliable sources confirm it.

These are timestamped messages between characters. These likely formed a different storyline to the UNotes, as these were all already removed from levels when the UNotes were written.

Some of the additional files can be found in the original Will You Snail? demo.

This song was used when the game was just a side project. The song would become slightly more distorted after some deaths. These were shared by Yän in the Will You Snail? Discord on 3 February 2021.[9]

An unfinished, more melancholy composition of Hello AI. This version was originally uploaded by Jonas in the betatesting channel of the Will You Snail? Discord on 10 May 2021.

Hello AI, were you the one
Who put this into my brain?
I feel like you might be listening
So how about you send me a sign?

Oooh,
Hello AI, can you tell me where I am?
Am I in a jar? Am I in space?
I really have to say, this universe
Looks suspiciously hostile towards humans, yeah

Hello AI, were you the one
Who put this into my brain?
I feel like you might be listening
So how about you send me a sign?

Yän and Jonas Tyroller – Traumatized Squid and the Unicorn

This is a collaboration between Yän and Jonas for their music jam.[10] Although it likely was never meant to appear in-game, the ending seems to contain an extended variation on Unicorn's theme. It played on the Discord server's music bot under the name "Trauma Squid" and was posted by Yän on 23 May 2020.[11]

Yän's part lasts roughly two minutes, and Jonas's (with Unicorn's leitmotif) takes up the last minute. Each section is based on a chapter from the lore at the time.

An original version with only Yän's part, dated 29 February 2020, can be found on the Discord.

Jonas used many songs from the Youtube Audio Library as placeholders.

Unicorn Heads - My Train's A Comin'

This song was used as a reference for the main theme.[12]

This song was used as a placeholder for disco levels. It can also be found in Will You Snail? - Winter

This song was used as a placeholder for combat levels.[13]

Retrieved from "https://willyousnail.wiki.gg/wiki/Scrapped_Content?oldid=3004"
Categories:
Cookies help us deliver our services. By using our services, you agree to our use of cookies.