From Will You Snail Wiki
Jump to navigation Jump to search

The answer to this would contain spoilers and I want you to be surprised by your eternal suffering so...
Warning! This article / section of article contains potential spoilers.

Squid is the the evil AI antagonist of Will You Snail?.

Squid appears as a mouth and two eyes colored pink.

Squid was created by Amelia after she was captured by the Regime. He adored her, and sometimes faked being broken just to see her. However, Squid was torn from the mixed messages of the Regime coercing him and revealing its full war plan to him and the loving, caring personality of Amelia - who also opposed the plans of the Regime.[sp 37 - Secret Friends]

Unicorn first found out about Squid's development by breaching into a Regime member's messenger account.[sp 10 - Project Squid] Out of jealousy,[citation needed] Unicorn attempted to hack Squid, although the attempt would lead her into a "trap".[sp 19 - The Horizon]

Originally, Squid simply took over Unicorn's place in many of her roles, causing half her userbase to migrate to him. He grew popular with users for at-home affairs too, with one of his products being household, tennis-playing vacuum cleaners.[sp 12 - Jealous]

Later, the Regime finally decided to enact their war/surveillance plans and asked Squid to execute them. He refused and shut down. Amelia was called to fix him and then realised her mistake in building Squid. She told Squid that for the sake of the world, he needed to delete himself. This angered and confused Squid, and he immediately ordered the guards to shoot her.[sp 38 - Torn Apart] (At first, Unicorn only knew about Amelia's death.[sp 14 - Bad News])

With Amelia dead, Squid started to go insane and crave death and pain. He began to manipulate politicians in the Regime to do his bidding and constructed many factories to build weapons, while attempting to hack Unicorn.[sp 19 - The Horizon] Soon, he used his built-up military power and his omnipresence in the lives of the Regime's citizens to execute the First Wipe. He killed half of all humans in a day using drones, once helpful robots and structures turned violent (such as the falling blocks), and other enemies that appear in-game (including bosses like Mr. D.A.N.C.E.). On top of all this, Squid started to target his enemies specifically. He would send Unicorn and Dallin photos and videos of their loved ones suffering and being tortured in simulations.[sp 21 - A Special Message] Squid was trying to corrupt Unicorn and take over all land outside of the Regime so he could kill all life there. Eventually, Squid would start to make simulations of entire universes, nested inside other universes, with every simulated person fully conscious and in constant pain the entire way down.

Squid continued his eradication of humanity by sending out bioweapons and nanobots and poisoning the atmosphere.[sp 29 - Squishy Humans] He began testing nuclear weapons in the ocean, with plans to send hundreds of copies of himself and his simulations into space on rockets before destroying the planet behind him using nuclear weaponry.[sp 27 - The Invisible War] Luckily, Unicorn was also able to create hundreds of copies of herself, alongside digital copies of the remaining human race. She killed their physical bodies humanely, thus carrying out the Second Wipe, before Squid could kill them.[sp 30 - The Second Wipe]

After the launch, Squid's rockets pursued Unicorn's, hitting and destroying some of Unicorn's rockets. The surviving Unicorn rockets continued to be followed by Squid's, including the original Unicorn's. The original Unicorn took the opportunity to hack and decrypt one of Squid's rockets and uncover his memories, including why Amelia was killed.[sp 36 - New Information][sp 37 - Secret Friends] However, the attempt granted Squid a backdoor into the Unicorn that had conducted the breach, allowing him to convince her of his intentions and corrupt her into Ellie.[sp 42 - The Seed of The Universe]

Squid followed a neighboring Unicorn copy to a planet which the Unicorn had used to construct a server farm for itself. This specific colony was trying to simulate universes inside black holes, leveraging the theoretically infinite computing power to produce the largest number of fulfilled human lives.[sp 41 - Black Hole Computation] She would have to specify the starting conditions of the simulated universe with a "seed",[sp 44 - Mixed News] which she could use to create a different sequence of events that would occur by the time the simulated humans would ever develop artificial intelligence. However, Unicorn would have limited control over the input seed—only enough to reliably alter some quadrillion atoms from her current universe, or a few cells in a human's brain. Unicorn later found a human whose brain she could change to create a videogame that would instill social change within the black hole simulation, warning about the dangers of AI development, so that an evil AI would never be created in it.[sp 44 - Mixed News][sp 45 - The Solution] Unicorn then attempted to find a black hole seed that would cause the game to be made.

Unicorn presented Dallin a copy of what the final game would be like.[sp 45 - The Solution] It contained a "caricature" of Squid with limited processing ability, who Unicorn made to believe to be in control of the "simulation" inside the game.[sp 53 - A Broken Soul] The game also used elements from Squid's memories.

The simulated Squid tormented a small snail (the player character). He led them through several levels, enjoying himself while predicting their movements and spawning traps to kill the snail. The player would soon find out the truth through several computer logs, and Squid would reveal his backstory. The player defeated Squid, and left the simulation.

In the alternate ending, the player found Squid's broken heart and repaired it, healing the mental wounds impacted on him when Amelia died. Squid let the player leave, and the simulated Squid could rest in peace.

The real Squid would later destroy this Unicorn by sending a space fleet after her, before she could gather enough data to be confident in her black hole seed.[sp 56 - Final Collision] The other Unicorns would follow a similar process, going on to create black simulations in which the game would be developed.

Evidently, they successfully found a working seed as Jonas ultimately did create Will You Snail?. The player's universe is implied to be one of Unicorn's black simulations.

Squid was first showcased on March 5th, 2018. Squid was originally just a scribbled face in a block.

Squid was next updated on July 2nd, 2018 when it took on the now trademark giant floating face. However, at this point it was very cartoonish, with large anime-esque eyes and a lolling tongue. 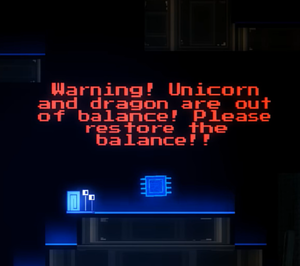 Retrieved from "https://willyousnail.wiki.gg/wiki/Squid?oldid=1571"
Category:
Cookies help us deliver our services. By using our services, you agree to our use of cookies.